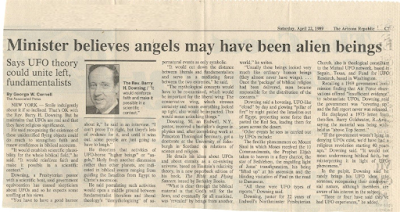 […] “Normally these beings appeared very very similar to odd beings (they nearly
by no means have wings). … As soon as the ‘bundle’ of biblical faith had been
delivered, man grew to become accountable for the distribution the contents.”

Downing mentioned a hovering, UFO-like “cloud” by day and glowing “pillar of fireplace”
by evening guided the Israelites out of Egypt, projecting some power that parted
the Crimson Sea, main them for years throughout the desert.

Different occasions he sees as carried out by UFOs embody:

The hearth like phenomenon on Mount Sinai by which Moses obtained the Ten
Commandments, the Prophet Elijah taken to heaven in a fiery chariot, the star
of Bethlehem, the engulfing gentle of Jesus’ transfiguration, his being “lifted
up” at his ascension and the blinding visitation of Paul on the highway to
Damascus.

“All these had been UFO varieties of studies,” Downing mentioned.