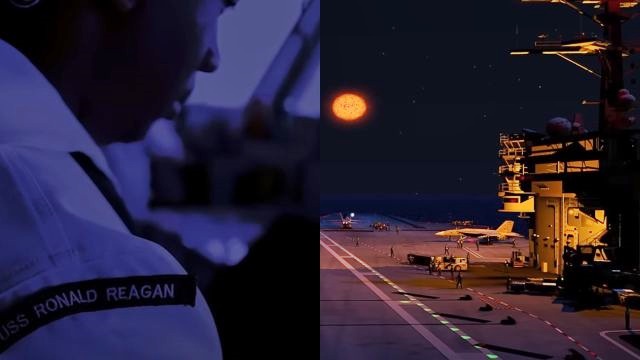 Based on witnesses who have been on the nuclear-powered Nimitz-class supercarrier that fateful evening, a roughly 20 to 40-foot large, luminous spherical object immediately confirmed up and started to hover over the ship’s flight deck.

Karol Olesiak who was a third class petty officer and Quartermaster on the Ronald Reagan on the time of the incident instructed The Debrief that when he arrived to alleviate the earlier watch that night, the outgoing Quartermaster of the Watch indicated one thing was already occurring at the moment, although the person supplied no further info. Nevertheless, it quickly grew to become obvious to Olesiak that one thing was taking place exterior above the flight deck.

“I’m fairly certain ‘it’ was there,” Olesiak mentioned. “They usually have been like, ‘I don’t know what that’s. I don’t care.’ You already know what I imply? Like that they had an angle like ‘I’m going to my rack. I don’t care. … don’t even hassle me about this shit’… So this ‘factor’ is there, the whole lot of my watch and since the officers are ignoring it, I’m compelled to disregard it.”

Olesiak mentioned he noticed a big spherical and orange-colored glowing object with a fiery floor hovering about 100 ft above the flight deck.

He mentioned he considered this object instantly by way of the home windows on the bridge at eye stage. Olesiak says the floor of the thing reminded him of biblical descriptions of the “burning bush”.